Once again I found myself scouring the British Newspaper Archives, this time for Sophia Park (nee Love).  This Sophia Love, as opposed to one of my many other Sophia Loves, is my 1st cousin 4x removed.  To date I have been unable to find her death record, burial record or an obituary and I was hoping that today would be the day – it wasn’t.  I did, however, discover another Sophia – Sophia Park…

After further investigation I realized that this Sophia was also one of mine!  Agnes Sophia Park (known as Sophia) was born on 22 Apr 1911 in Drumrammer, Drumachose and is the daughter of John Park, son of Sophia Love Park who I was initially researching, and Mary Jane Harbison.  She is also my 3rd cousin 2x removed. 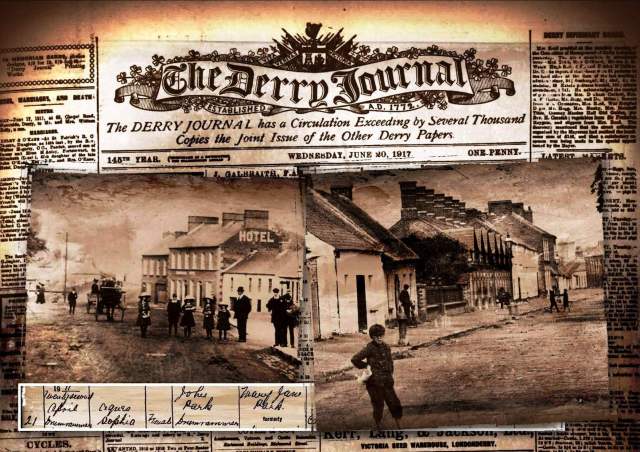 Next, as I always do, I checked for a death record – sadly, I found one all too quickly!  On 2 Apr 1917, just a few short days before her sixth birthday, Samuel Collins, the Occupier of the Limavady Workhouse, reported her death.  The Cause of Death of Sophia Park from Drumrammer read: ‘Pneumonia, 5 days.  Heart Failure Certified.’  I had discovered her birth and death in less than fifteen minutes.  Due to her cause of death and the fact that she died in the workhouse I returned to the British Newspaper Archives to see if a report of an Inquest had been published on her death.

An article from the Derry Journal, published 20 Jun 1917, read:  ‘At Limavady Petty Sessions yesterday, before Mr. J.D. Boyd, presiding, Mr. Sparrow, R.M., Messrs. Samuel Cassidy, Robert Guthrie, Robert Douglas, Thomas Oakey, John M’Laughlin, Henry Connell, a case was investigated in which the N.S.P.C.C., by Inspector A. Houston, summoned John Parke, a carpenter and farmer, of Drumrammer, and Mary Park, his wife, for neglect and ill-treatment of Sophia Park, the seven-year-old daughter of the male defendant.  Mr. Daniel MacLaughlin, solicitor, Coleraine, appeared for the N.S.P.C.C., and Mr. Wm. Horner, Limavady defended.  Mr. MacLaughlin said the case was a particularly flagrant one, and as a result of the neglect and lack of medical treatment, the little child had died…’ 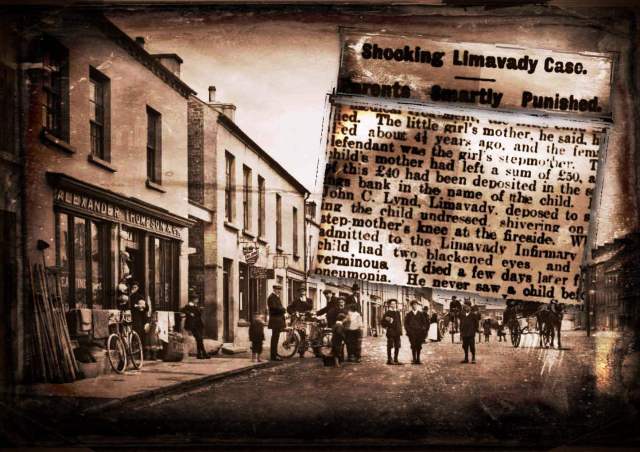 ‘…The little girl’s mother, he said, had died about 4 ½ years ago, and the female defendant was the girl’s stepmother.  The child’s mother had left a sum of £50, and of this £40 had been deposited in the savings bank in the name of the child.  Dr. John C. Lynd, Limavady, deposed to seeing the child undressed, shivering on its step-mother’s knee at the fireside.  When admitted to the Limavady Infirmary the child had two blackened eyes, and was verminous.  It died a few days later from pneumonia.  He never saw a child before so thin and yet living.  James Sweeny, school teacher, Drumrammer, said his sister had sometimes fed the child when it was attending his school.  It would eat weeds and other green vegetable growths.  James M’Ginnis said he had been ten weeks in Parke’s employment.  The girl, Sophia, didn’t get the same food as the others in the house.  It got teach without milk, and bread without butter.  Maurice M’Keague, for the defence, said he never saw the child ill-treated; and David Smiley said the child had a habit of eating weeds.  The defendants denied that they had ill-treated or neglected the child.  The Bench imposed a fine of £10 on Mrs. Parke, and committed John Parke to jail for two months, with hard labour.  Notice of appeal was lodged.’

No further information was to be found in the newspaper archives regarding an appeal.  However, upon searching the 1911 census records I discovered the family living at 12 Drumrammer, Keady, Londonderry.  The record revealed that Sophia’s mother was Mary Jane, who at twenty eight years of age was sixteen years younger than her husband John.  Sophia did not appear on the record as she was born a few short weeks after it was taken – I also discovered she had an older brother, one year old Stewart Harbinson Park. 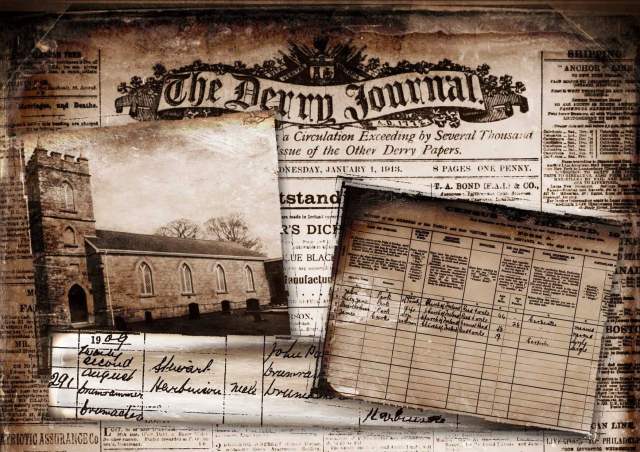 On 22 Aug 1909 Stewart Harbison Park was born at Drumrammer, Drumachose – he is my 3rd cousin 2x removed.  As with his sister, and as I always do, I searched for a death record.  Again, within minutes I discovered that on 31 Dec 1912 3 year old Stewart Harbison Park, son of a carpenter, died from “Scalds, 15 hours shock – Certified”.  His father was the informant of his death.

‘On Monday the four-year-old son of Mr. John Park, carpenter, Drumrammer, Limavady, met with a sad accident, as the result of which he died yesterday morning.  The little boy was playing about in the kitchen where a bucket of hot water had been placed on the floor, and, walking backwards, he fell into the water and was severely scalded about the legs and lower part of the body.  The housekeeper, who was present, had the child lifted from the bucket, and Dr. Lynd was immediately sent for.  Death took place as stated yesterday morning.  The fact that the little one’s mother died only a few weeks ago makes the circumstances peculiarly sad, and much sympathy is felt by all in the district with Mr. Park at his double bereavement.’ 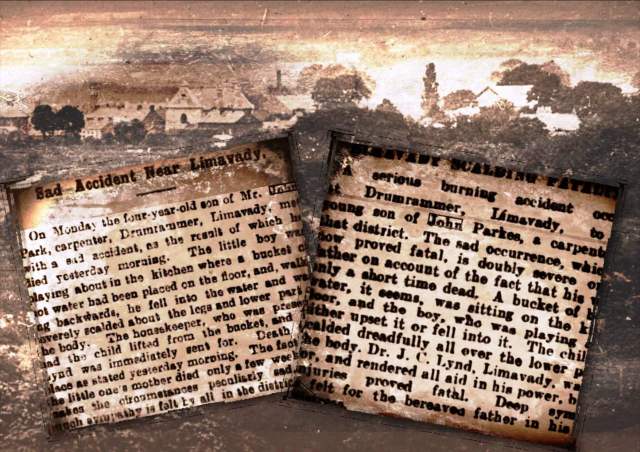 I have not yet unearthed the death record of Mary Jane Harbison Park or her cause of death.  There are many more Twisted Limbs to follow in this particular Branch of my family tree – hopefully they aren’t as tragic as these.

Come fairies, take me off this dull world for I would ride with you upon the wind and dance up the mountains.  – W.B. Yeats

Looking For "Dead People"! My Journey Back In Time - Tracing my ancestors and researching the counties, cities and towns where they resided. Taking a “Glimpse” into their lives and stories and the times in which they lived; all in an effort to learn about their “Dash”! “I read of a man who stood to speak at the funeral of his friend. He referred to the dates on her tombstone from the beginning – to the end. He noted that first came the date of her birth and spoke of the second with tears, but he said that what mattered most of all was the dash between those years.” I have always been interested in researching my family tree and “hanging out” in cemeteries. Like most of us... I didn't ask enough questions when elderly family were still living. Oh, what I would give for 24 hours and a camera with my ancestors… just to sit and listen! I'm researching many family lines, including: Murdoch, Wilson, Berry, Love, Scott, Beattie/Beatty, Hendren, Sweeney, Robinson and Elvin; just to name a few. My families are predominantly from counties Antrim, Donegal and Londonderry. However, it seems that many of them, both maternal and paternal lines, originally hailed from Co. Donegal. I was born and raised in Northern Ireland and now live in Ottawa, Canada, making frequent trips back home to visit with my family. Of course those visits also include treks to the many burial grounds of my ancestors. My most recent trip back home was during the summer of 2019! Looking forward to August of 2020 when I will return. If you are interested in help tracing your ancestors I’d love to hear from you!
View all posts by CJ Murdoch →
This entry was posted in Co. Londonderry, Family History, Ireland and tagged Family, Family History, Genealogy, Ireland, Limavady, Love Family, Park Family. Bookmark the permalink.

9 Responses to Ill Treatment of Child!