Once again I found myself exploring the British Newspaper Archives, specifically for Leah Love, when I came across a publication which, to me, was like a gift from the universe.

She was a daughter, sister, niece and granddaughter – she is also my 2nd great aunt.  Her parents John Love and Leah McLaughlin married on 3 May 1865 at the Killowen Church of Ireland in Coleraine.  The couple was joined in matrimony in the presence of John Gray and Richard Crossley.  Prior to finding the death notice of their daughter Sophia, I never knew she existed.  She is the eighth child and fifth daughter of eleven children, a sibling of my great grandfather Johnston Alexander Love.

Although her death notice indicated Sophia was seven at the time of her death, her death and burial records revealed that she was only six.  Thomas Lindsay, Coroner for Londonderry, noted that her death was the “result of an accidental burning”.  This little nugget of information sent me back to the British Newspaper Archives to search for a publication regarding an inquest.  I was not disappointed! 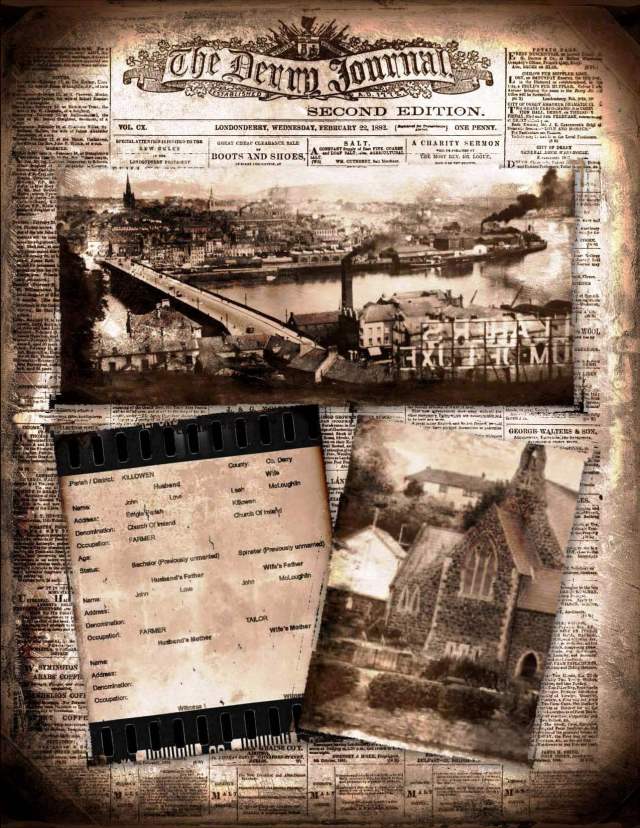 “An inquest was held by Mr. Lindsay on Monday on the body of a little girl named Sophia Love, daughter of John Love, of Rosemount, Derry, who met her death by burning.  Deceased’s mother was examined, and stated that between eight and nine o’clock on Saturday morning she left the little girl standing in front of the fire in her night-dress while she went to the front door.  Her attention was immediately afterwards attracted by the child’s screams, and on going back she found her night dress on fire.  She believed a spark or coal cinder must have come in contact with the dress and set it on fire.

Dr. M’Laughlin deposed that, acting for Dr. Corbett, he was called in to see the deceased on Saturday morning.  On visiting her he found her suffering from extensive burns, extending over right side of body and abdomen as far as the neck.  The right arm was also burned.  Deceased was suffering very much from the shock to the system at the time he saw her.  In his opinion death resulted from the shock to the system caused by the burns received.  Having heard all the evidence, the jury returned a verdict to the effect that Sophia Love died at Rosemount on the 19th February, from the result of an accidental burning on the 18th instant, and added that no blame was attached to any person.” 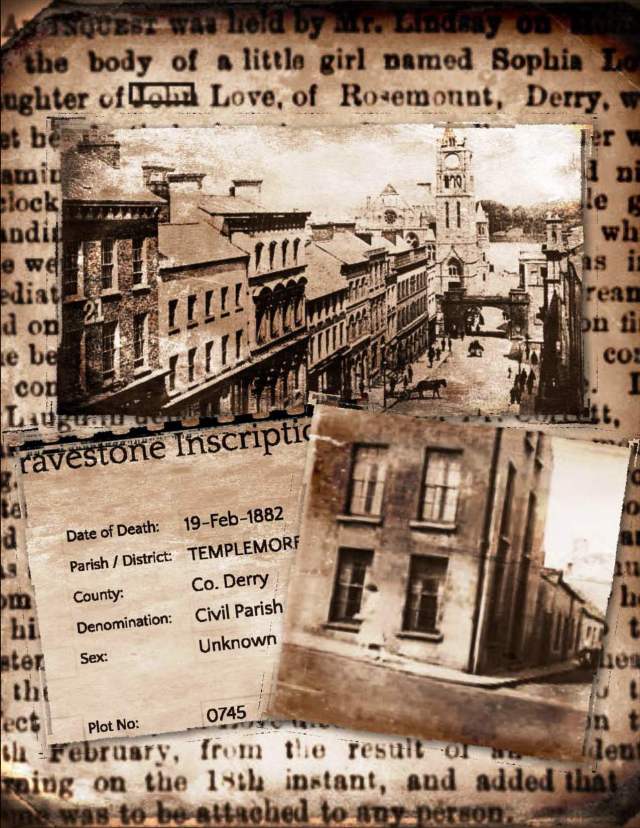 Sophia’s short life met with a tragic end – sorrowfully, she was not my only ancestor who died from an accidental burning at a very young age.

One hundred and thirty four years after her untimely death my 2nd great aunt Sophia left me a sign!  For several years I have been trying to confirm that Sophia Love who died on 15 Feb 1826 in Drumachose, Co. Londonderry, the birth place of my 2nd great grandfather, is my 4th great grandmother.  There were many clues which led me to believe that Sophia of Drumachose was “mine” – I just needed a little more validation in my direct family line.  All of my 4th great aunts and uncles have Christian names that have recurred through my family for decades– the name Sophia had only, to my knowledge, ever occurred once – she was the daughter of my 4th great uncle Johnston Love.  Now the name has appeared in my direct line validating my belief!

Sophia, like her cousin,  was named after her great grandmother.  Thanks to her I have many more Twisted Limbs and Crooked Branches to follow.  Once again, the British Newspaper Archive has been a wealth of information, allowing me to find, cite and source my 5419th ancestor!

Like so many others – Sophia Love of 20 Lower Road, Londonderry is interred at the Derry City Cemetery.  Sadly, she is buried in “pauper’s ground”.

May She Rest In Peace!

Looking For "Dead People"! My Journey Back In Time - Tracing my ancestors and researching the counties, cities and towns where they resided. Taking a “Glimpse” into their lives and stories and the times in which they lived; all in an effort to learn about their “Dash”! “I read of a man who stood to speak at the funeral of his friend. He referred to the dates on her tombstone from the beginning – to the end. He noted that first came the date of her birth and spoke of the second with tears, but he said that what mattered most of all was the dash between those years.” I have always been interested in researching my family tree and “hanging out” in cemeteries. Like most of us... I didn't ask enough questions when elderly family were still living. Oh, what I would give for 24 hours and a camera with my ancestors… just to sit and listen! I'm researching many family lines, including: Murdoch, Wilson, Berry, Love, Scott, Beattie/Beatty, Hendren, Sweeney, Robinson and Elvin; just to name a few. My families are predominantly from counties Antrim, Donegal and Londonderry. However, it seems that many of them, both maternal and paternal lines, originally hailed from Co. Donegal. I was born and raised in Northern Ireland and now live in Ottawa, Canada, making frequent trips back home to visit with my family. Of course those visits also include treks to the many burial grounds of my ancestors. My most recent trip back home was during the summer of 2019! Looking forward to August of 2020 when I will return. If you are interested in help tracing your ancestors I’d love to hear from you!
View all posts by CJ Murdoch →
This entry was posted in Co. Londonderry, Family History, Geneaology, Ireland and tagged Burial Records, Co. Londonderry, Derry City Cemetery, Family History, GeneaBlogger, Ireland, Londonderry, Love Family, McLaughlin Family. Bookmark the permalink.