The Belfast Blitz – A Personal Connection

I grew up knowing that my father was born in Belfast and grew up in Ballymoney.  Ballymoney is a small town in Co. Antrim which is a short distance away from the Causeway Coast and the Glens of Antrim.  It’s a place where I had the pleasure of living for a few years and a place, as a young girl; I didn’t want to leave… but that’s a story for another time!

What I hadn’t known, until I was older, was the reason that my father and my grandparents had moved to Ballymoney.  My grandmother, who was most certainly a “city girl”; was born and raised in Cherryville Street, Belfast and worked at McGowan & Ingram Ltd, Wholesale Stationers & Printers until she married in 1933.

Granny Murdoch (2nd from left) and her friends from McGowan Ingram.
Photo not to be used without prior consent from the author

My grandfather, on the other hand, was a small town guy; who had grown up in Ballymoney where many generations of my “Murdoch’s” before him had grown up as well.  I had made the assumption that the plan was to move back to my grandfathers’ home town; a town which might be more conducive to raising a young son!  Well, it would seem I was wrong! 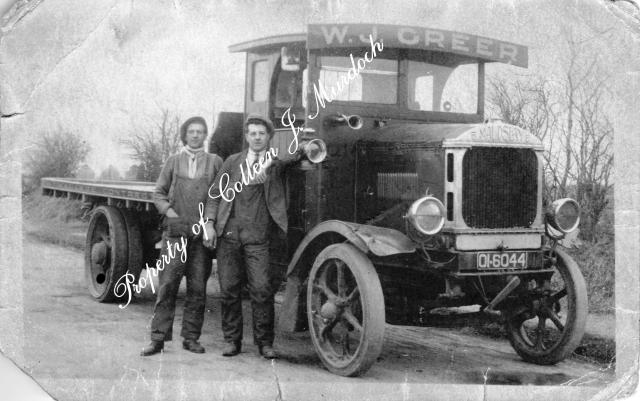 My Grandfather (right)
Photo not to be used without prior consent of the author.

It was Easter 1941, my father and grandparents were in Ballymoney, escaping the city after the first of three air raids had hit Belfast on 7 April 1941.  My great grandfather convinced my grandparents to go to Belfast, pick up some things; and return to the safety of small town Ballymoney.  He suggested that my father, who was six at the time; remain with them; which he did.

My father and grandparents (left) at 23 Vandyck Gardens, Greencastle, BelfastPhoto not to be used without prior consent from the author.

PRONIs “Historical Topics Series: 2” states:   “Belfast had been relatively unaffected by WWII initially but, with the fall of France in 1940, Belfast’s situation changed dramatically.  The city now lay within range of German bombers flying from western France.  Even so, by April 1941 much remained to be done to enable the city to cope with major bombing attacks and when large-scale air raids began on the night of 7-8 April 1941, they found the city practically unprepared.  A raid over the dockside not only caused considerable damage to the Harland and Wolff premises but left 13 people dead.  A second air raid on the night of 15-16 April caused considerably more damage. 180 German bombers took part in the attack that lasted from just before midnight until 4 a.m. on Easter Tuesday.”  More here:  http://www.proni.gov.uk/historical_topics_series_-_02_-_the_belfast_blitz.pdf

On Easter Tuesday, 15 April 1941, 180 German bombers again attacked Belfast.  One of the homes that was hit was 23 Vandyck Gardens; my grandparents home!

“76 landmines drift down attached to parachutes intending to tear apart the concrete and steel factories.  Over half fall in residential areas:  Vandyk Gardens and Veryan Gardens are decimated – over 130 homes are destroyed. “Source unknown”

An example of the devastation left after the Blitz

My grandparents survived; physically unscathed.  They had sought refuge at Cave Hill, where my grandmother remembered feeling the ground vibrate under her; and pieces of mortar hitting her face.  Eventually they were reunited with some of their family; and discovered that my great uncle had spent the night looking for their bodies.  They returned to Ballymoney with nothing more than the clothes they wore and a pillow case of personal possessions.

They were two of the lucky ones…

Looking For "Dead People"! My Journey Back In Time - Tracing my ancestors and researching the counties, cities and towns where they resided. Taking a “Glimpse” into their lives and stories and the times in which they lived; all in an effort to learn about their “Dash”! “I read of a man who stood to speak at the funeral of his friend. He referred to the dates on her tombstone from the beginning – to the end. He noted that first came the date of her birth and spoke of the second with tears, but he said that what mattered most of all was the dash between those years.” I have always been interested in researching my family tree and “hanging out” in cemeteries. Like most of us... I didn't ask enough questions when elderly family were still living. Oh, what I would give for 24 hours and a camera with my ancestors… just to sit and listen! I'm researching many family lines, including: Murdoch, Wilson, Berry, Love, Scott, Beattie/Beatty, Hendren, Sweeney, Robinson and Elvin; just to name a few. My families are predominantly from counties Antrim, Donegal and Londonderry. However, it seems that many of them, both maternal and paternal lines, originally hailed from Co. Donegal. I was born and raised in Northern Ireland and now live in Ottawa, Canada, making frequent trips back home to visit with my family. Of course those visits also include treks to the many burial grounds of my ancestors. My most recent trip back home was during the summer of 2019! Looking forward to August of 2020 when I will return. If you are interested in help tracing your ancestors I’d love to hear from you!
View all posts by CJ Murdoch →
This entry was posted in Belfast, Co. Antrim, Family History, Geneaology, Ireland and tagged Ballymoney, Beautiful Places in Ireland, Belfast Blitz, Berry Family, Co. Antrim, Family History, Murdoch Family. Bookmark the permalink.

4 Responses to The Belfast Blitz – A Personal Connection