“At the morning service of Great James Street Presbyterian Church, Londonderry, on Sunday, Rev. J.A. Donaldson, B.A., recalled that on Remembrance Sunday Mr. S. Morrison, accompanied by Captain Sir James Wilton, M.C., had laid the wreath on the War Memorial of the congregation.  We were unaware then” he said. ‘that just a few hours before that very moment his son, Pilot Officer Cecil Morrison, had given his life on service in the Middle East. …”

Samuel Cecil Morrison, known as Cecil, was the first son of Samuel Morrison and Charlotte Rebecca Wilson (Cissy) and the eldest of six children.   He was born on 22 Jun 1920 on Creggan Road in Londonderry, and was baptized in Great James Street Presbyterian Church where his family worshipped and his father Samuel was a Scout Leader. 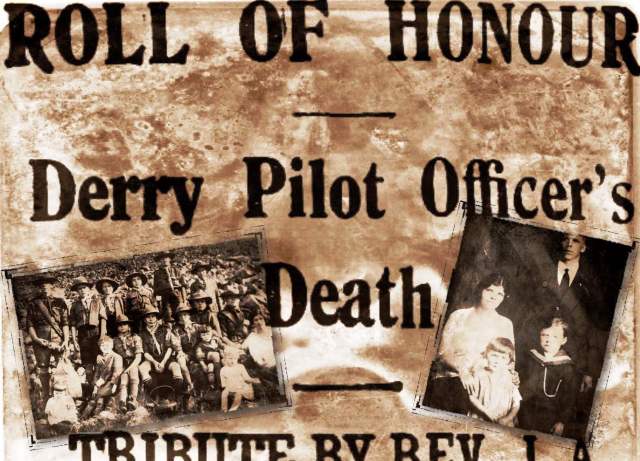 During the Second World War, Cecil joined the Royal Air Force Volunteer Reserve circa 1940 when he traveled to California, USA to start training for the Royal Air Force.  On May 27, 1942 records reveal that he was joined in Holy Matrimony to Margaret (Betty) Elizabeth Barclay at Runcorn, Cheshire, England.  Known as Betty, she too was serving her country during World War II.

“… A few hours afterwards official communication came that Cecil Morrison had been killed.  On Sunday that first communication was confirmed when the Chaplain at Malta wrote to his young wife, telling her how the last offices were performed in a little cemetery there. 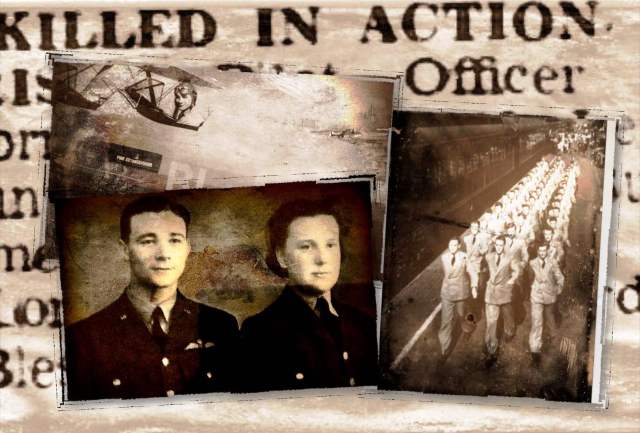 ‘We wish this morning to express our sympathy to his young wife, to his father and mother, and to the members of the family,” said Rev. Mr. Donaldson, who added that he knew Cecil Morrison for almost two years after he came to Great James Street Church.  He was a member of their Christian Endeavour Society, a teacher in the school, and a young fellow who promised well as far as the Church and the Kingdom of God was concerned.’

That day they as a congregation sorrowed.  Although they had been in the fourth year of war and although they had 70 and 80 members on active service, that was the first son of that congregation to fall in this war.  They remembered Cecil Morrison with gratitude to God for his interest in the work of that Church as a young man growing up in the midst of them.  On entering the Service, he speedily won promotions and just before he was killed it was intimated that further promotion was shortly to be given to him.  ‘He has now been promoted to a place of honour and to higher service,’ Mr. Donaldson concluded.” 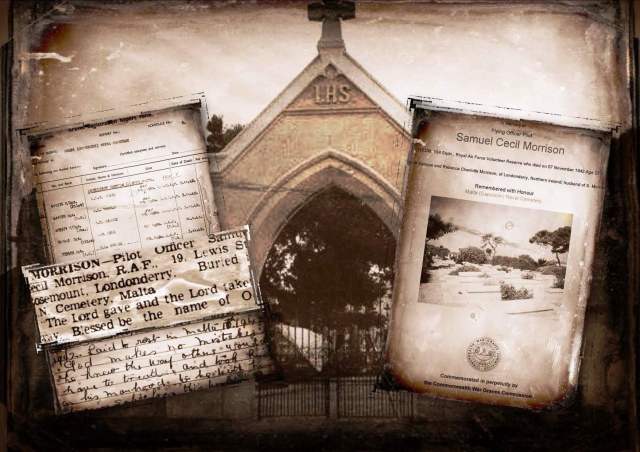 The congregation bowed in silent prayer for a short period.”

An excerpt from the Morrison/Wilson Family Bible penned by his mother, and my great aunt, Cissy read “F/O. S.C. Morrison died on Active Service 1942.  Laid to rest in Malta 11th 1942. God makes no mistakes, He knew the way others would have to tread; and took him in his manhood to be with him forever.  Safe from this worlds mire.”

May He Rest In Peace!

Looking For "Dead People"! My Journey Back In Time - Tracing my ancestors and researching the counties, cities and towns where they resided. Taking a “Glimpse” into their lives and stories and the times in which they lived; all in an effort to learn about their “Dash”! “I read of a man who stood to speak at the funeral of his friend. He referred to the dates on her tombstone from the beginning – to the end. He noted that first came the date of her birth and spoke of the second with tears, but he said that what mattered most of all was the dash between those years.” I have always been interested in researching my family tree and “hanging out” in cemeteries. Like most of us... I didn't ask enough questions when elderly family were still living. Oh, what I would give for 24 hours and a camera with my ancestors… just to sit and listen! I'm researching many family lines, including: Murdoch, Wilson, Berry, Love, Scott, Beattie/Beatty, Hendren, Sweeney, Robinson and Elvin; just to name a few. My families are predominantly from counties Antrim, Donegal and Londonderry. However, it seems that many of them, both maternal and paternal lines, originally hailed from Co. Donegal. I was born and raised in Northern Ireland and now live in Ottawa, Canada, making frequent trips back home to visit with my family. Of course those visits also include treks to the many burial grounds of my ancestors. My most recent trip back home was during the summer of 2019! Looking forward to August of 2020 when I will return. If you are interested in help tracing your ancestors I’d love to hear from you!
View all posts by CJ Murdoch →
This entry was posted in Co. Londonderry, Family History, Ireland and tagged Family History, Genealogy, Ireland, Londonderry, Morrison Family, Wilson Family, World War II. Bookmark the permalink.

3 Responses to Roll of Honour!