Too Many Deaths Too Soon!

Born on 9 Jul 1866 in Fountain Place, Londonderry she was a daughter, sister, wife and mother.  Her name was Rebecca and she was named after her mother and her great grandmother.  Rebecca Beattie is my great grand aunt, one of ten children born to James Beattie and Rebecca McCadden of Letterkenny & Rathmullan, Co. Donegal respectively.

Rebecca was the sixth child and the 2nd daughter in the Beattie family.  Her younger sister Charlotte Elizabeth is my great grandmother.  On 2 Mar 1855 her parents were married in the Rathmullan Church of Ireland by Rev. H. Ferguson.  Sometime between their marriage and the birth of their first son Robert, who was born on 21 Feb 1856, they had moved to Londonderry and were residing in Fountain Place. 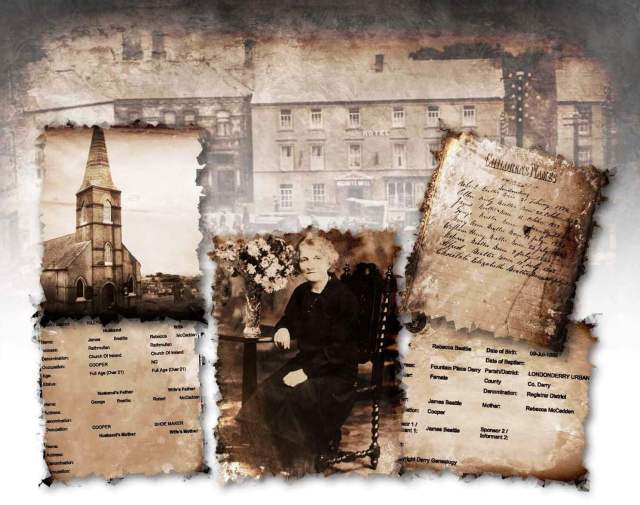 On 2 Sep 1887, at the young age of twenty one, Rebecca gave birth to her first daughter, Mildred Rose, who was known as Millie.  The Birth Record revealed that the father was Thomas James Flanagan, a butler, who was only nineteen.  Although Millie was baptized as “Flanagan” her parents were not married.  Rebecca remained living in her family home, located at 81 Marlborough Park, Rosemount while Thomas was residing on Lecky Road.

Thomas James Flanagan and Rebecca were united in Marriage at St. Augustine’s Church of Ireland – the “Wee Church on the Walls” on 17 Dec 1891.  St. Augustine’s is a beautiful little Church where many of my ancestors before her had married.  Their union was witnessed by Philip Fletcher Flanagan, the Grooms brother, and Martha Lochrie.  Their Marriage Record disclosed that Thomas was a Cartwright living at 162 Lecky Road and Rebecca, a “factory worker”; was residing at 81 Marlborough Park. 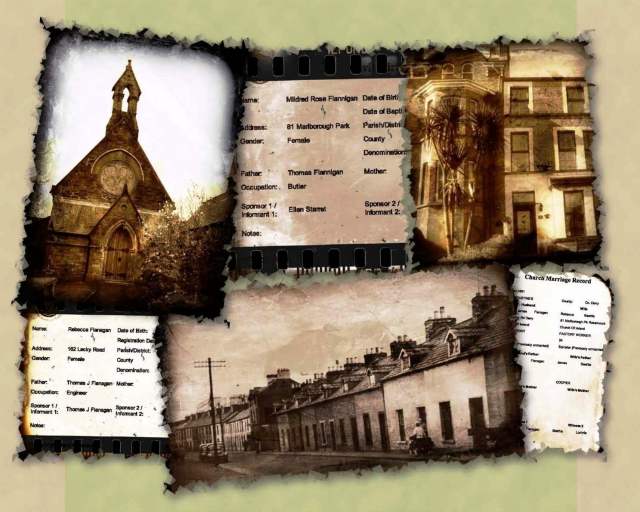 On the 22 Nov 1892 at 162 Lecky Road their second daughter Rebecca was born.  Sadly, Rebecca’s life was not to be a long one.  On 6 Jun 1893, just before she was seven months old, Rebecca passed away.  Her death record showed the cause of death as “Teething – 14 days; Convulsions – 8 days, Certified”.  Her maternal uncle Alfred Beattie was present at her death.

While dealing with this loss the family was to be dealt yet another blow!  On 30 Jun 1893, just weeks after the death of her young daughter, Rebecca passed away at her parents’ home in the Creggan.  Once again Alfred Beattie, her brother, was present at the death.  The death record noted the cause of death as “Phitisis Pulmonalis (Pulmonary Tuberculosis), 6 months certified”.  John Foster, the Assistant Registrar, recorded her death just as he had recorded the death of her daughter a few short weeks before.  Both Rebecca and her infant daughter Rebecca are interred at the Derry City Cemetery. 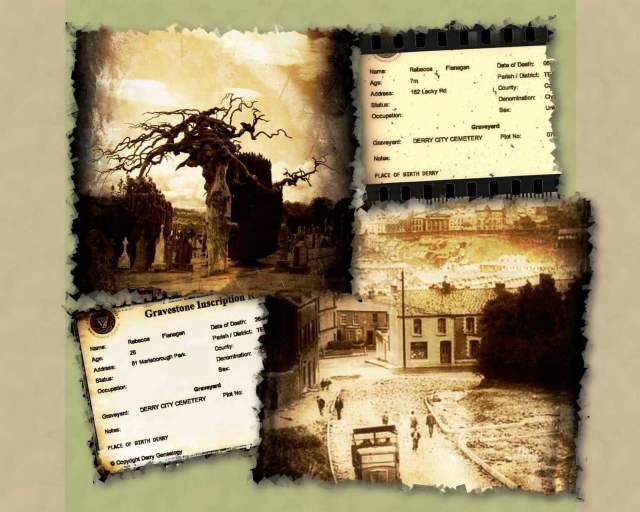 After the devastation that my family must have dealt with, I “needed” to find out more -what had become of her husband and their two very young children?

In 1907 at the age of nineteen, their eldest daughter Millie and William Bogle were joined in Marriage at Christ Church in Londonderry.  Sarah Coyle and Robert Bogle witnessed their wedding.  Very quickly their family grew – Millie and William had three sons between 1909 and 1913 named Robert, William and Samuel.

It would seem that long lives were not meant to be on this particular crooked branch of my family tree.  On 21 Mar 1914 Millie passed away from “acute laryngeal phthisis (tuberculosis), 1 1/2 months certified” leaving her three young sons without a mother.  Like her mother before her she died young and at the home of her maternal grandmother, 81 Creggan Road.  Her husband William was present at her death.

Yet another loss for her father Thomas James Flanagan… what happened to Thomas?  Well, that’s a story for another time!

Looking For "Dead People"! My Journey Back In Time - Tracing my ancestors and researching the counties, cities and towns where they resided. Taking a “Glimpse” into their lives and stories and the times in which they lived; all in an effort to learn about their “Dash”! “I read of a man who stood to speak at the funeral of his friend. He referred to the dates on her tombstone from the beginning – to the end. He noted that first came the date of her birth and spoke of the second with tears, but he said that what mattered most of all was the dash between those years.” I have always been interested in researching my family tree and “hanging out” in cemeteries. Like most of us... I didn't ask enough questions when elderly family were still living. Oh, what I would give for 24 hours and a camera with my ancestors… just to sit and listen! I'm researching many family lines, including: Murdoch, Wilson, Berry, Love, Scott, Beattie/Beatty, Hendren, Sweeney, Robinson and Elvin; just to name a few. My families are predominantly from counties Antrim, Donegal and Londonderry. However, it seems that many of them, both maternal and paternal lines, originally hailed from Co. Donegal. I was born and raised in Northern Ireland and now live in Ottawa, Canada, making frequent trips back home to visit with my family. Of course those visits also include treks to the many burial grounds of my ancestors. My most recent trip back home was during the summer of 2019! Looking forward to August of 2020 when I will return. If you are interested in help tracing your ancestors I’d love to hear from you!
View all posts by CJ Murdoch →
This entry was posted in Burial Records, Co. Donegal, Co. Londonderry, Family History, Geneaology, Ireland and tagged Beattie Family - Maternal Line, Co. Donegal, Co. Londonderry, Derry City Cemetery, Family History, Flanagan Family, GeneaBlogger Daily Blogging Prompt, Ireland. Bookmark the permalink.

17 Responses to Too Many Deaths Too Soon!