Back Another Wilson Generation and New Connections…

Just recently a “Twist of Fate” led me back in time to Burt, Co. Donegal to discover many more of my Wilson ancestors.

An extract from A Topographical Dictionary of Ireland by Samuel Lewis, 1837 describes Burt as: “A parish, in the barony of Ennishowen, county of Donegal, and province of Ulster, 6 miles (N. W.) from Londonderry; containing 3765 inhabitants.  This parish, which anciently formed part of the parish of Templemore, is situated on Lough Swilly …”

Eliza Jane Wilson is my 2nd great grand aunt; sister of my 2nd great grandfather Thomas and daughter of William.  Eliza was born in Burt, Co. Donegal circa 1848; unfortunately, I have been unable to find a birth or baptism record for her.

On 12 Jan 1872 Margaret McGrath and Edward Dobbin witnessed the marriage of Eliza to David Doherty in the First Derry Presbyterian Church, Londonderry.  The Marriage record revealed that David’s father was James – both he and Eliza’s father were labourers.

In 1901 Eliza, David and their daughter Mary, who was twenty one at the time; where living in 28 Carrowreagh, Burt.  The census revealed that the family had a three year old boy visiting them – his name… Thomas Wilson Diver!  This confirms, without a doubt; that this is my family.  Thomas Wilson Diver is my 1st cousin 2x removed, the son of Eliza Wilson and George Diver!  That’s a story I’ll delve into another time!

On 9 Nov 1903 Eliza was widowed when her husband David died at the young age of fifty seven.  Their daughter, Mary was listed as the informant of his death.

Just over one year after the death of her father on 20 Dec 1904, in a Civil Ceremony; Mary of Burt, Donegal married William Wilson of Rosemount, Londonderry.  Maggie Goligher and Robert Wilson, the brides brother and sister, witnessed their wedding.  It would seem I had uncovered another family link… Mary’s new husband William was my great grand uncle, the son of Thomas, and Mary’s first cousin!  Another Crooked Branch to follow in what seems to becoming a “shallow gene pool”! 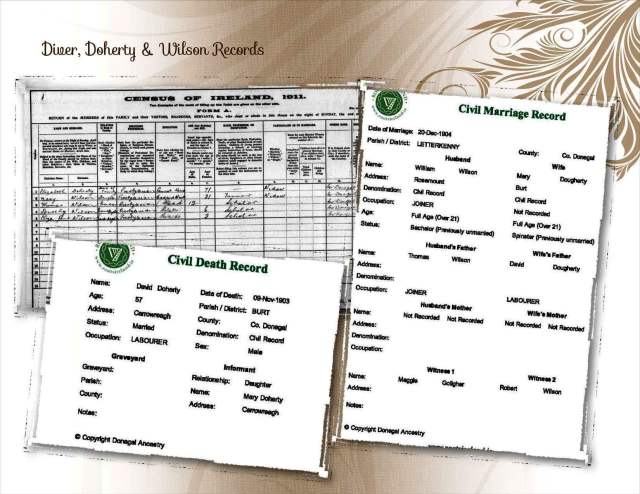 The Doherty family was found living in 21 Carrowreagh at the time the 1911 census was taken.  Much had changed for my family in the ten years since the 1901 census had been recorded.  Details revealed that not only was Eliza Jane widowed, her daughter Mary was also widowed.

One thing did remain the same… Thomas Diver (aka Thomas Wilson Diver) was still living with the family and now listed as a “grandson”!  The question remains – why was Thomas living in Donegal and not with his parents and siblings in Londonderry!  My search continues…

Looking For "Dead People"! My Journey Back In Time - Tracing my ancestors and researching the counties, cities and towns where they resided. Taking a “Glimpse” into their lives and stories and the times in which they lived; all in an effort to learn about their “Dash”! “I read of a man who stood to speak at the funeral of his friend. He referred to the dates on her tombstone from the beginning – to the end. He noted that first came the date of her birth and spoke of the second with tears, but he said that what mattered most of all was the dash between those years.” I have always been interested in researching my family tree and “hanging out” in cemeteries. Like most of us... I didn't ask enough questions when elderly family were still living. Oh, what I would give for 24 hours and a camera with my ancestors… just to sit and listen! I'm researching many family lines, including: Murdoch, Wilson, Berry, Love, Scott, Beattie/Beatty, Hendren, Sweeney, Robinson and Elvin; just to name a few. My families are predominantly from counties Antrim, Donegal and Londonderry. However, it seems that many of them, both maternal and paternal lines, originally hailed from Co. Donegal. I was born and raised in Northern Ireland and now live in Ottawa, Canada, making frequent trips back home to visit with my family. Of course those visits also include treks to the many burial grounds of my ancestors. My most recent trip back home was during the summer of 2019! Looking forward to August of 2020 when I will return. If you are interested in help tracing your ancestors I’d love to hear from you!
View all posts by CJ Murdoch →
This entry was posted in Co. Donegal, Co. Londonderry, Family History, Geneaology, Ireland and tagged Co. Donegal, Co. Londonderry, Diver Family, Doherty Family, Family History, Genealogy; Ireland; Records, Norry Family, Wilson Family. Bookmark the permalink.

6 Responses to Londonderry to Donegal, Again!