The north of Ireland was battered by heavy rains as violent storms caused flooding.  The downpours swept in from the Atlantic, hitting Co Donegal before moving across Northern Ireland during Tuesday evening.  Bridges collapsed, roads were washed out and people had to be rescued after being trapped in their cars and homes.

On 23 August 2017 I awoke to a Facebook post by Martin Parke … sadly “My Tree” with Twisted Limbs & Crooked Branches was another ‘victim’ of the storm.

‘When great trees fall,
rocks on distant hills shudder,
lions hunker down
in tall grasses,
and even elephants
lumber after safety.

When great trees fall
in forests,
small things recoil into silence,
their senses
eroded beyond fear. …’ 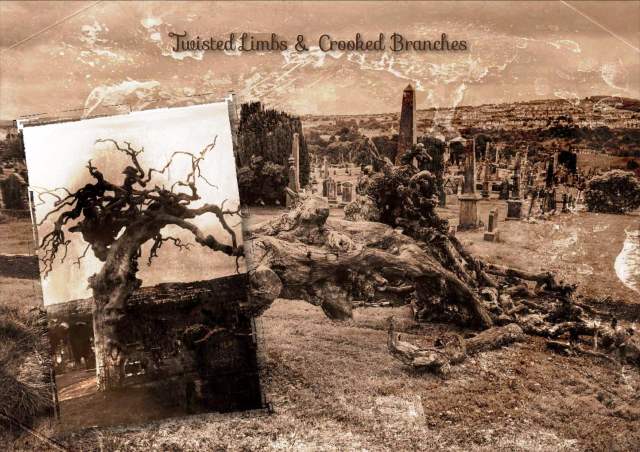 In July of 2012, shortly before my trip “back home”, I decided to rename my family tree as it was simply named the Murdoch/ Wilson/ Berry/ Love Family.  Original, I know!  As I follow all of my family lines, not only my direct ancestors, I have discovered first cousins who married first cousins and their children married their first cousins – which seem to have been common practice in the very early 1800’s.  I often joke that the ‘gene pool’ was getting rather shallow; and maybe I should be grateful that no ‘webbed feet’ had turned up yet!  ‘Twisted Limbs & Crooked Branches’, in my opinion, was a fitting name.

Two weeks later we, my little family and I, were in Londonderry to visit with ‘living family’ and of course, to visit the Derry City Cemetery the resting place of many of my ancestors.  The Cemetery is old, however not as old as some you will find in Ireland, where graves date back to the 1400’s.  The first reported burial in the Cemetery was of a ten month old child named Robert McClelland.  Robert, who resided on Orchard Street, died on December 10, 1853.

Arriving at the Cemetery and joined by my aunt, map in hand, I was in awe of the number, size and diversity of headstones.  I was immediately drawn to the trees scattered throughout the Cemetery – and to one tree in particular.  My aunt thought I was just a little crazy… to her, they just looked dead!

After a few hours, and great success, one grave remained elusive.  We continually returned to the same area where the grave obviously should have been, but there was no headstone or marker at the site.  We checked with the Cemetery staff who indicated we were in the right location.  We left the Cemetery only to return with our husbands – handed them the map with a ‘please go find this particular grave’.  They ended up in exactly the same location that we had…

‘Great souls die and
our reality, bound to
them, takes leave of us.
Our souls,
dependent upon their
nurture,
now shrink, wizened.
Our minds, formed
and informed by their
radiance, fall away.
We are not so much maddened
as reduced to the unutterable ignorance of
dark, cold
caves….’.

There is no headstone on the grave, it must have eroded or was vandalized.  However, the grave does have a VERY significant marker… the plot is to the left of the tree that I had been drawn to when initially entering the Cemetery.  The tree with Twisted Limbs & Crooked Branches!

And when great souls die,
after a period peace blooms,
slowly and always
irregularly. Spaces fill
with a kind of
soothing electric vibration.
Our senses, restored, never
to be the same, whisper to us.
They existed. They existed.
We can be. Be and be
better. For they existed.

“My Tree” with Twisted Limbs & Crooked Branches was a monument, and will continue to be, to my family who are interred beside it and the name of my family tree before I ever knew of its existence. A strange coincidence… I think not!

Looking For "Dead People"! My Journey Back In Time - Tracing my ancestors and researching the counties, cities and towns where they resided. Taking a “Glimpse” into their lives and stories and the times in which they lived; all in an effort to learn about their “Dash”! “I read of a man who stood to speak at the funeral of his friend. He referred to the dates on her tombstone from the beginning – to the end. He noted that first came the date of her birth and spoke of the second with tears, but he said that what mattered most of all was the dash between those years.” I have always been interested in researching my family tree and “hanging out” in cemeteries. Like most of us... I didn't ask enough questions when elderly family were still living. Oh, what I would give for 24 hours and a camera with my ancestors… just to sit and listen! I'm researching many family lines, including: Murdoch, Wilson, Berry, Love, Scott, Beattie/Beatty, Hendren, Sweeney, Robinson and Elvin; just to name a few. My families are predominantly from counties Antrim, Donegal and Londonderry. However, it seems that many of them, both maternal and paternal lines, originally hailed from Co. Donegal. I was born and raised in Northern Ireland and now live in Ottawa, Canada, making frequent trips back home to visit with my family. Of course those visits also include treks to the many burial grounds of my ancestors. My most recent trip back home was during the summer of 2019! Looking forward to August of 2020 when I will return. If you are interested in help tracing your ancestors I’d love to hear from you!
View all posts by CJ Murdoch →
This entry was posted in Burial Records, Co. Londonderry, Derry City Cemetery, Family History, Geneaology, Ireland, Misc. and tagged Family History, Geneaology, Ireland, Love Family, Misc., Wilson Family. Bookmark the permalink.