From Stoneyford to Belfast and Back...

Mary Agnes Scott was born on 21 Jan 1867 in Knocknadona, Magheragall Parish, Co. Antrim.  She was the third child of ten born to Mary Agnes Hendren and Richard James Scott.  She is my paternal great grandmother.  Family history indicated, and records have since confirmed, that Richard was a long-established, wealthy and well respected farmer in the area. 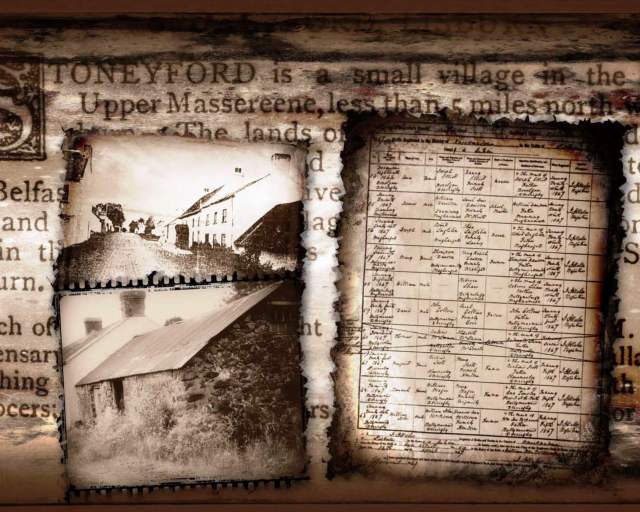 My grandmother Lizzie told the story of Mary “running off to Belfast to avoid marrying a neighbouring farmer” – something that was apparently done “back in the day” in order to increase the size of the family farm holdings.  Wedding plans were well underway; the wedding dress had already been purchased when Mary left for Belfast.  At this point in time I have been unable to discover to whom she was betrothed – chances are I will never know!

Family whispers also suggested that Mary was written out of her father’s Will.  Again something I was able to validate with the discovery of Richard James Will – apparently “R.J.” wasn’t a very forgiving man!

I decided very early on that this was a lady with a will and mind of her own, a lady whom I definitely admired and could relate to.  It must have taken considerable courage, especially in the late 1800’s, to leave her family and country living for the “big city” of Belfast!  After her “great escape” I discovered Mary living on Westmoreland Street working as a mid wife for a Belfast Doctor.

On 25 Feb 1893 and “according to the Rites and Ceremonies of the Church of Ireland, after licence by John G. Hopkins in a Marriage solemnized at Willowfield Church in the Parish of Willowfield in the Diocese of Down” and in the presence of James Stewart and Annie McIlwaine, Mary Scott of 44 Westmoreland Street, Belfast was United in Marriage with James Berry, a labourer, of 41 Moore Street, Belfast.

The couple resided on Tyne Street at the beginning of their marriage and spent the remainder of their lives on Cherryville Street, Belfast.  They seem to have led a full and happy life, unfortunately, not without the sadness and tragedy that often follows any family. Together they had eight children – five daughters and three sons – two of their daughters died as infants.  Family lore confirms that Mary continued her work as a midwife until much later in her life.  While James, a plumber, had his own business and worked on the Titanic at one point in time, along with several of his employees.

In reading some of her obituaries I have the sense that my great granny, Mary Agnes Scott Berry, was loved by many.

“BERRY – August 12, 1939 at her residence, 41 Cherryville Street, Mary Agnes, dearly beloved mother of Mary A. (Minnie) Rae. “A voice is from our household gone, A face we loved is still; A place is vacant in our home, Which never can be filled.  Deeply regretted by her sorrowing Daughter and Son-in-law.  Minnie and Robert Rae, and grandchildren.”

“BERRY – August 12, 1939, at her residence, 41 Cherryville Street, Mary Agnes dearly beloved mother of Frances Whaley. “Dearest mother how I’ll miss you, Life will never be the same. Tear of earth will never wake thee, But through Christ we’ll meet again.  Deeply regretted by her sorrowing Daughter and Son-in-law.  Frances and James Whaley.”

BERRY – August 12, 1939, at her residence, 41 Cherryville Street, Belfast. Mary Agnes Berry, dearly beloved sister of Frances Geddis. “Love in death can let us see, What love in life should always be.  Deeply regretted by her sorrowing Sister, Brother-in-law, and Family.  Frances and Robert G. Geddis.”

“BERRY – August 12, 1939 at her residence 41 Cherryville Street Belfast, Mary Agnes widow of James Berry and dearly beloved daughter of the late Richard James and Mary Agnes Scott, Stoneyford.  Funeral from above address, to-morrow (Tuesday) at 11 a.m. to the family burying-ground, Stoneyford Churchyard.  Friends will please accept this intimation.  ‘Absent from the body, present with the Lord’.  Deeply regretted by her sorrowing family.”

Mary Agnes finally returned “home” to the place where it all began – May she Rest in Peace!

Looking For "Dead People"! My Journey Back In Time - Tracing my ancestors and researching the counties, cities and towns where they resided. Taking a “Glimpse” into their lives and stories and the times in which they lived; all in an effort to learn about their “Dash”! “I read of a man who stood to speak at the funeral of his friend. He referred to the dates on her tombstone from the beginning – to the end. He noted that first came the date of her birth and spoke of the second with tears, but he said that what mattered most of all was the dash between those years.” I have always been interested in researching my family tree and “hanging out” in cemeteries. Like most of us... I didn't ask enough questions when elderly family were still living. Oh, what I would give for 24 hours and a camera with my ancestors… just to sit and listen! I'm researching many family lines, including: Murdoch, Wilson, Berry, Love, Scott, Beattie/Beatty, Hendren, Sweeney, Robinson and Elvin; just to name a few. My families are predominantly from counties Antrim, Donegal and Londonderry. However, it seems that many of them, both maternal and paternal lines, originally hailed from Co. Donegal. I was born and raised in Northern Ireland and now live in Ottawa, Canada, making frequent trips back home to visit with my family. Of course those visits also include treks to the many burial grounds of my ancestors. My most recent trip back home was during the summer of 2019! Looking forward to August of 2020 when I will return. If you are interested in help tracing your ancestors I’d love to hear from you!
View all posts by CJ Murdoch →
This entry was posted in Belfast, Co. Antrim, Family History, Ireland and tagged Berry Family, Co. Antrim, Family History, Geneaology, Ireland, Scott Family. Bookmark the permalink.

17 Responses to The Great Escape!!!