Interred at the Western Necropolis in Maryhill, Glasgow…

She was a daughter, sister, wife, mother and aunt – she is my third great aunt and sister to my 2nd great grandfather William.  She was the third child and first daughter of six children born to John Murdock and Sarah MacMillan.

Sarah Jayne Murdoch was born on 12 May 1857 in my paternal home town of Ballymoney Co. Antrim.  Like many of my family before and after her, she was baptized in the First Ballymoney Presbyterian Church.  The Church is said to be the oldest building in the Borough having opened in 1777 – it is still in use today. 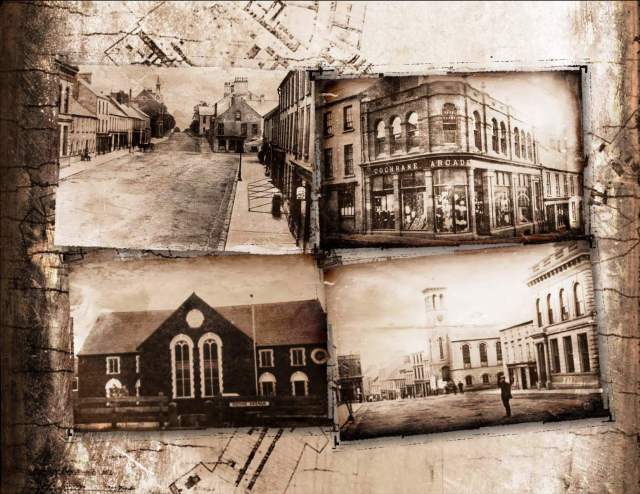 On 1 May 1883 at the Agherton Church of Ireland in Portstewart, Co. Londonderry in the presence of Samuel Gilmore and James McCurdy, Sarah Jayne Murdoch of Flowerfield, Portstewart was wed in Holy Matrimony to John Henry Burkhill, a labourer of Cappagh, Portstewart.  The Church Marriage Record confirmed her father was John Murdock, a labourer, as was John’s father William.  Sadly, Sarah Jayne’s mother had passed away before seeing her daughter marry.

Molyneaux William Shuldham Burkhill was born on 10 Feb 1884 in Burnside, Port Stewart and baptized in the Agherton Church of Ireland on 4 May 1884.  At some point between Molyneux’s birth and the birth of Herbert, their second son, the couple had relocated to England.  The 1891 Scottish Census revealed the family had grown once again; the couple had two daughters – Henrietta and Walterina.  The ever expanding family was now living at 64 Montgomerie Lane, Ardrossan, Ayrshire – an ancient town which can be found in a map of Scotland as early as the thirteenth century.

The 1901 Scottish Census disclosed that, yet again, the family had relocated and were now living at 46 Hutcheson Street, Maryhill, Lanarkshire.  They had another addition to their family – a daughter named Lillias.  Census records are a wealth of information and verified that two of Sarah Jayne’s nephews, Alexander and Archibald Murdock (the sons of her brother Alexander) were living with the family.  In 1911 the census documented Sarah Jayne and John living at 246 Main Street, Maryhill with their two youngest daughters along with Elizabeth McCafferty, a 14 year old domestic servant.

Described as a “strong and hearty man” John was a Steam Manager and Engine Man who was required to travel extensively throughout the British Isles due to his career.  Initially he worked for Lawson & Sons and later MacAlpine & Sons Contractors.

The 1903 Slater’s Royal National Directory of Scotland revealed another clue about Sarah Jayne and the life she led.  It stated: “Burkhill, Mrs. Sarah, refreshment rooms, 154 Wyndford Street, Maryhill.”  It is my understanding that the restaurant was funded solely by compensation received by John Henry after an accident at work where he lost both an arm and an eye.  This is a Twisted Limb that I will continue to follow to gain more clarification and verification.

Sadly, Sarah Jayne met with a violent and untimely demise.  A True Copy of Declaration made by The Reverend H. Otley Mayne, Vicar of St. John the Evangelist Church, stated (in part):  “After spending most of her life at Maryhill, Glasgow, Scotland she was knocked down by a motorcycle and her skull was smashed on the 7 Nov 1926.  She was unconscious until she died the following morning.”  On 9 Nov 1926 a death notice published in the Lancashire Evening Post clarified her death and simply stated: “Sarah Murdoch, or Burkhill (69), who was knocked down by a motor cycle in Maryhill-road, Glasgow, died yesterday.” 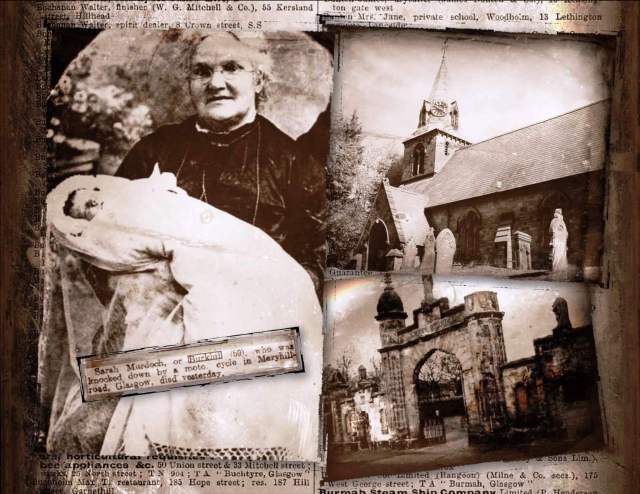 My third great aunt Sarah Jayne Murdoch Burkhill is interred at the Western Necropolis in Maryhill, Glasgow.  In her remembrance, one day I hope to lay flowers on her grave.  May She Rest In Peace!

Note:  The two different spellings of Murdoch/Murdock are completely intentional.  To this day my various family lines spell it both ways!

Looking For "Dead People"! My Journey Back In Time - Tracing my ancestors and researching the counties, cities and towns where they resided. Taking a “Glimpse” into their lives and stories and the times in which they lived; all in an effort to learn about their “Dash”! “I read of a man who stood to speak at the funeral of his friend. He referred to the dates on her tombstone from the beginning – to the end. He noted that first came the date of her birth and spoke of the second with tears, but he said that what mattered most of all was the dash between those years.” I have always been interested in researching my family tree and “hanging out” in cemeteries. Like most of us... I didn't ask enough questions when elderly family were still living. Oh, what I would give for 24 hours and a camera with my ancestors… just to sit and listen! I'm researching many family lines, including: Murdoch, Wilson, Berry, Love, Scott, Beattie/Beatty, Hendren, Sweeney, Robinson and Elvin; just to name a few. My families are predominantly from counties Antrim, Donegal and Londonderry. However, it seems that many of them, both maternal and paternal lines, originally hailed from Co. Donegal. I was born and raised in Northern Ireland and now live in Ottawa, Canada, making frequent trips back home to visit with my family. Of course those visits also include treks to the many burial grounds of my ancestors. My most recent trip back home was during the summer of 2019! Looking forward to August of 2020 when I will return. If you are interested in help tracing your ancestors I’d love to hear from you!
View all posts by CJ Murdoch →
This entry was posted in Family History. Bookmark the permalink.

21 Responses to A First Ballymoney Presbyterian!