A  Diver of Londonderry & Donegal…

Born on 7 Feb 1898 in 21 Lewis Street in the City of Londonderry, Thomas Wilson Diver was the second child and eldest son of eight born to George William Diver and, my great grand aunt; Elizabeth Wilson.

I discovered Thomas just recently after unearthing Short Service Record No. 8211 belonging to Robert Norry Wilson, his uncle and my great grand uncle; which led me to Burt, Co. Donegal and another Crooked Branch of my family tree.

The 1901 census revealed that three year old Thomas was “visiting” his maternal great aunt, Eliza Jane Doherty (nee Wilson); in 28 Carrowreagh, Burt, Co. Donegal.  By the time the 1911 census was recorded Thomas was shown as “living” with the family, who were now residing in 21 Carrowreagh.  At this point in time his name was recorded as Thomas Wilson and he was listed as a boarder and scholar.  His parents and siblings were still living in Londonderry.  It is unclear why Thomas was living in Burt and not with the rest of his family.  It bothered me – I needed to find out more about Thomas Wilson Diver.

I researched further and discovered much more than anticipated; it sadly started with his death record.  The UK De Ruvigny’s Roll of Honour (1914 – 1919) revealed that Thomas “joined the 10th Inniskilling Fusiliers on 12 Oct. 1914 and served with the Expeditionary Force in France and Flanders”.  It also noted that he “was wounded and invalided home on 28 Aug 1916.”  It would seem that Thomas was not to be deterred – he returned to France in Jan 1917 and transferred to the 2nd Inniskillings in Mar 1918.  The record also stated that he “was present at the German offensive that month, and was killed in action 2 Oct. following.”

Although the UK De Ruvigny’s Roll of Honour (1914-1919) indicated that Thomas was killed in action on 2 Oct 1918; more records revealed that his actual date of death was 29 Sep 1918 in France and Flanders. 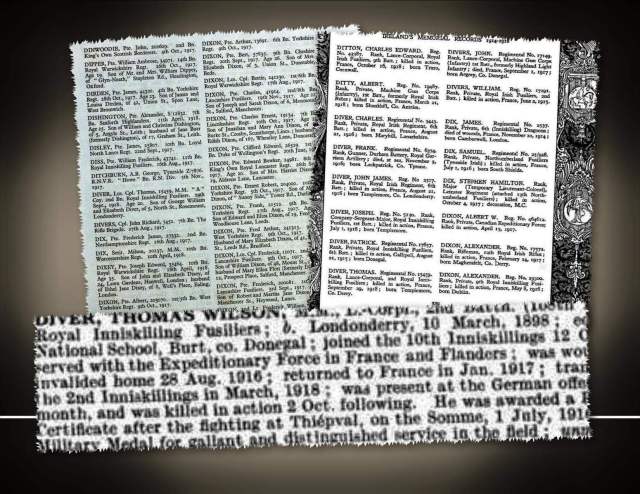 In May 1917 Thomas was “awarded a Parchment Certificate after fighting at Thiepval on the Somme, 1 Jul 1916; and the Military Medal for gallant and distinguished service in the field”.  The record shows his address as Creggan Road in Londonderry, his parents’ home.  It also noted that he was educated in Burt, Co. Donegal.

The UK Army Registers of Soldiers’ Effects confirmed that this was indeed my Thomas Wilson Diver.  His father George William Diver was listed as his father and a War Gratuity of £23 10 Shillings for his war service was paid.  The Grave Registration Report noted: “DIVER, Lce. Cpl. Thomas, 15459, M.M. “A” Coy. 2nd Bn.  Royal Inniskilling Fusiliers. 29th Sep 1918. Age 20, son of George William and Elizabeth Diver of 5 North Street, Rosemount, Londonderry.”

His life was cut short… Thomas Wilson Diver, not only is he  Remembered with Honour  at the Tyne Cot Memorial and Commemorated in Perpetuity by the Commonwealth War Graves Commission; he is commemorated on the Diamond War Memorial in Londonderry.

The records for the Diamond War Memorial state, “Thomas Wilson Diver – who was a member of First Derry Presbyterian Church and a holder of the Military Medal – was also awarded an Ulster Division Certificate for conspicuous gallantry on July 1, 1916, in the Thiepval sector, for showing great courage and ability in handling his Lewis gun in the German ‘C’ line.  Although he escaped unscathed that day, he was later wounded and gassed. Lance Corporal Diver joined the Ulster Division on its formation, although not sixteen years of age.”

It also revealed the contents of a letter written by the Reverend J. G. Paton informing Tommie’s aunt, Mrs. Wilson, of her nephew’s death.  It said; “I have known deceased for a long time, and can tell you he was a good boy and a keen soldier, who always did his duty cheerfully. He never did better than on the day on which he was killed; it was in an attack on the enemy, and he did good work.”

Tommie will always be remembered by me!  Like many other he has found a little space in my heart!

I would like to say a very special thank you to Nigel Henderson of Great War Belfast Clippings who provided me with a newspaper clipping of a notice which read:  “Lance Corporal T.W. Diver, Royal Inniskilling Fusiliers, Creggan Road, Derry, who has received an Ulster Division Certificate, commended for gallantry in the field.”  The best part… it came with a photo!  Many thanks Nigel!

Looking For "Dead People"! My Journey Back In Time - Tracing my ancestors and researching the counties, cities and towns where they resided. Taking a “Glimpse” into their lives and stories and the times in which they lived; all in an effort to learn about their “Dash”! “I read of a man who stood to speak at the funeral of his friend. He referred to the dates on her tombstone from the beginning – to the end. He noted that first came the date of her birth and spoke of the second with tears, but he said that what mattered most of all was the dash between those years.” I have always been interested in researching my family tree and “hanging out” in cemeteries. Like most of us... I didn't ask enough questions when elderly family were still living. Oh, what I would give for 24 hours and a camera with my ancestors… just to sit and listen! I'm researching many family lines, including: Murdoch, Wilson, Berry, Love, Scott, Beattie/Beatty, Hendren, Sweeney, Robinson and Elvin; just to name a few. My families are predominantly from counties Antrim, Donegal and Londonderry. However, it seems that many of them, both maternal and paternal lines, originally hailed from Co. Donegal. I was born and raised in Northern Ireland and now live in Ottawa, Canada, making frequent trips back home to visit with my family. Of course those visits also include treks to the many burial grounds of my ancestors. My most recent trip back home was during the summer of 2019! Looking forward to August of 2020 when I will return. If you are interested in help tracing your ancestors I’d love to hear from you!
View all posts by CJ Murdoch →
This entry was posted in Burial Records, Co. Donegal, Co. Londonderry, Family History, Ireland and tagged Burial Records, Burt, Co. Donegal, Co. Londonderry, Diver Family, Doherty Family, Family History, GeneaBlogger, Geneaology, Ireland, Wilson Family, WW1. Bookmark the permalink.

13 Responses to A Life Cut Short!