Theresa is my 2nd great aunt; she is one of eleven children born to Richard Scott and Ann Jane Tinsley.  The Scott families were well respected farmers in Stoneyford, Co. Antrim, where I’ve traced them back to the late 1700’s.  If you have researched Ireland then you are aware that it becomes very difficult to trace lineage prior to that; other than “hanging out in cemeteries” and delving into Church records; it is almost impossible.

Although I have many conflicting records for Theresa’s birth it would seem she was born early in the year 1838.  Records from the Derriaghy Church of Ireland show that she was baptized March 25, 1838.

On 15 Feb 1859 Theresa was married to John Simpson by S. Anderson, Curate of St. Aiden’s Parish Church.  Their wedding was witnessed by Richard Scott, her brother and my 2nd great grandfather; and Alexander Thompson, who I believe was one of her cousins.  More research is required to confirm this supposition.

Theresa and John had one son, John Edward; who was baptized at St. Anne’s Cathedral in the Shankill, Belfast, on 23 Nov 1859.  Family lore would suggest that Theresa and John never “took up house together”; which might intimate a “shot gun wedding”!  Very shortly after John Edward’s birth his father went to America – never to return, leaving Theresa to raise her son alone.

Seemingly, Theresa moved on with her life and remarried on 24 Mar 1869.  She married William Waddell, son of Robert; in St. Anne’s Church of Ireland by Rev. R. Kerr.  Philip and Mary Magee, her sister and brother in law; witnessed their wedding.

It would seem that lengthy marriages for Theresa where not to be; William passed away on 1 Oct 1881.  Once again, Theresa was alone.  Her son, John Edward had emigrated to Chicago, Illinois, USA in 1880 with two of his cousins, Richard Dawson and Richard MaGee.  They had lived on neighbouring farms “back home”.

“Dear son; Just a few lines in answer to your kind letter which I received to day glad to find by it that you are coming home but will be a long while yet before I see you.  I would like you more home now but we will have to trust to God for he knows what is best.  I have been very bad this last week it is only the longer the worse but I will have to live to my times comes.  The doctors wife was down seeing me the other night I asked her if the doctor could give me anything to leave the pain, she told me just to do anything I thought of myself for the doctors could do nothing for me.  I thought this letter very long of coming, I thought every car that stopped on the street was you coming, but I hope you will come home at once.  There is great sickness in this town the(y) can’t get the coffins made in time their is extra men at them every night.  I think I have little more to say at present hoping to see you soon.  Mary is still with me yet.  I remains as every your aff. Mother.  Theresa Waddell, 26 Hopeton Street,  Belfast.  I don’t know what I would have done only for Mary.”

On 21 Feb 1892 Theresa passed away in her home in the presence of her son, John Edward.  Her death record shows cause of death as “Cancer of the Uterus; 8 months certified”.  The record also shows that she was the widow of William Waddell, Printer and she was 44 at the time of her death. 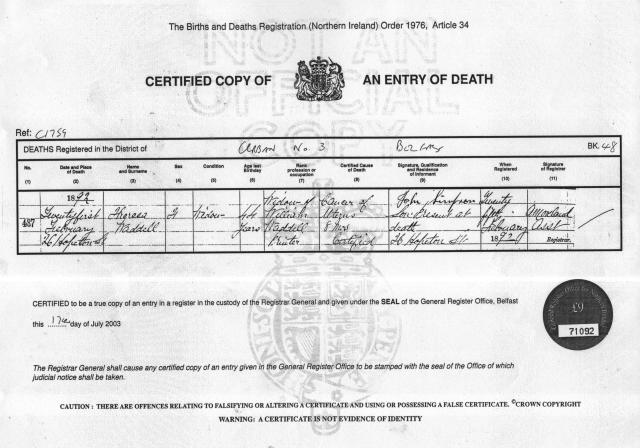 She is interred in the Belfast City Cemetery with her husband, William; her sister Ann Reid (nee Scott); and an infant by the name of William John McKnight, another family member.

Each time I read Theresa’s letter to John Edward I am overcome with sadness and a hope that she is now at peace.

Looking For "Dead People"! My Journey Back In Time - Tracing my ancestors and researching the counties, cities and towns where they resided. Taking a “Glimpse” into their lives and stories and the times in which they lived; all in an effort to learn about their “Dash”! “I read of a man who stood to speak at the funeral of his friend. He referred to the dates on her tombstone from the beginning – to the end. He noted that first came the date of her birth and spoke of the second with tears, but he said that what mattered most of all was the dash between those years.” I have always been interested in researching my family tree and “hanging out” in cemeteries. Like most of us... I didn't ask enough questions when elderly family were still living. Oh, what I would give for 24 hours and a camera with my ancestors… just to sit and listen! I'm researching many family lines, including: Murdoch, Wilson, Berry, Love, Scott, Beattie/Beatty, Hendren, Sweeney, Robinson and Elvin; just to name a few. My families are predominantly from counties Antrim, Donegal and Londonderry. However, it seems that many of them, both maternal and paternal lines, originally hailed from Co. Donegal. I was born and raised in Northern Ireland and now live in Ottawa, Canada, making frequent trips back home to visit with my family. Of course those visits also include treks to the many burial grounds of my ancestors. My most recent trip back home was during the summer of 2019! Looking forward to August of 2020 when I will return. If you are interested in help tracing your ancestors I’d love to hear from you!
View all posts by CJ Murdoch →
This entry was posted in Belfast, Burial Records, Co. Antrim, Family History, Geneaology, Ireland and tagged Belfast, Belfast City Cemetery, Co. Antrim, Derriaghy Church of Ireland, Family History, Geneaology, Glenavy, Scott Family, Simpson; Waddell, St. Aiden’s Parish Church, St. Anne's Cathedral - Shankill, Stoneyford. Bookmark the permalink.